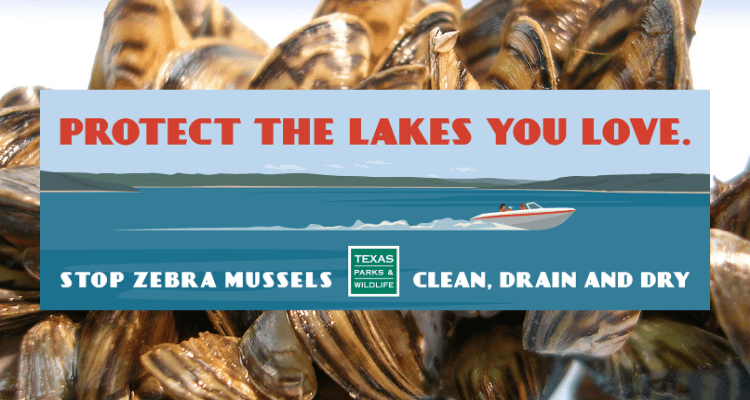 It has been ten years since the aquatic invasive species Zebra Mussels were found in Lake Texoma, which has accounted for approximately 28% of our available water supply. The District transported water from Texoma to a northern tributary of Lavon Lake, Sister Grove Creek. When Zebra Mussels were discovered in 2009 in Lake Texoma and subsequently Sister Grove Creek, NTMWD turned off our pump station and ceased transporting water to comply with the Lacey Act and protect Texas waterways.

In the decade since discovery of Zebra Mussels in Lake Texoma, the District worked with numerous local, state and federal agencies to regain access to this major source of supply for the North Texas region while safeguarding our waterways. It was through this combined effort that established reproducing populations of Zebra Mussels have not since been detected in Sister Grove Creek or Lavon Lake. NTMWD continues our efforts today and include mitigation strategies for invasive species in our construction of Bois d’Arc Lake.

A Look Back
In order to resume transporting water safely from Lake Texoma, it would take construction of a $310 million 46-mile raw water pipeline and an act of Congress to allow us to use it. At the time Texoma pumping operations ceased in the summer of 2009, Texas was on the brink of a devastating drought that would span five long, dry years. The water supply coming from Texoma was a necessity for the nearly 1.6 million North Texans living in our service area at the time. In the history of the District, there had been no greater challenge than the loss of more than a quarter of our water supply during a time of severe drought and population growth. This challenge was made even more complex with a change to the Texas-Oklahoma state boundary drawn in 2000 that placed our pump station almost
entirely in Oklahoma. After the Zebra Mussels discovery, if the District continued to pump water across “state lines,” we’d be in violation of the Lacey Act, which bans transport of injurious species, and subject to penalties of up to $500,000 for each offense.

The best way to resume pumping, protect Texas waterways and prevent future concerns was determined to be construction of a 46-mile pipeline and direct outfall from Lake Texoma into the Wylie Water Treatment Plant. However, the District still needed permission from the Federal government to use this method to transport the water which meant an amendment had to be passed to the Lacey Act. In 2012, after years of working with legislatures and numerous federal and state departments, the amendment passed permitting the District to begin construction of the pipeline and outfall. Construction was complete and we resumed pumping water from Lake Texoma in June 2014.

Today and Tomorrow
Our efforts to prevent the spread of Zebra Mussels in Texas waterways began in 2009 with a partnership with Texas Parks and Wildlife and several other entities. The Clean-Drain-Dry campaign as well as informational signage on area lakes in key locations to remind boaters to decontaminate their boat have been key to raising awareness about the threat this invasive species still holds for our lakes and water infrastructure. A new summer campaign launched last month encourages Texans to “Protect the Lakes You Love.”

Even though water is no longer directly discharged from Lake Texoma to Lavon Lake, NTMWD and our partner agencies at the US Geological Survey and Texas Parks and Wildlife continue to monitor our water supplies and infrastructure on a regular basis to ensure they are not contaminated. Divers are sent down to check our intake screens on Lake Texoma pump station, and we continue to evaluate the lake for any evidence of Zebra Mussels, their larvae or DNA. To date, there has been no evidence of an established reproducing population at Lavon Lake.

The District has also taken what we’ve learned over the years and incorporated it into our design and construction of Bois d’Arc Lake. Our new intake structure is designed to allow for mitigation efforts against Zebra Mussels. There is the ability to construct a tie-in that would connect the Leonard Water Treatment Plant with the Texoma Pipeline, when needed. Our partnership continues with Texas Parks and Wildlife by including signage and wash down stations at all boat ramps constructed for the lake.

The ten years following the discovery of Zebra Mussels in one our key water supply sources was a challenging time for the District. We still have a challenge ahead as the work continues toward a new state boundary that would put our pump station back in Texas as it was when it was originally built in 1989. It will continue to take a consolidated and consistent effort of our Board, Legislature and Staff in partnership with numerous agencies to work together to build the solution and educate our region to protect our water supply from this invasive species.