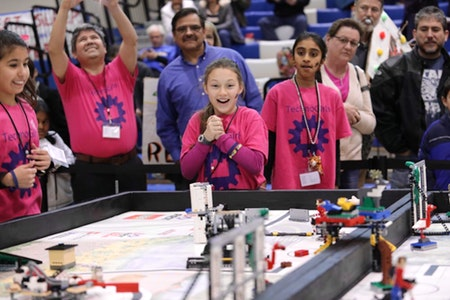 NTMWD and the John Bunker Sands Wetland Center will be participating in the Lego League Festival as part of the First Lego League Regional Championship on Feb. 3 at the Parish Episcopal School of Dallas.

The 2017–2018 Challenge, HYDRO-DYNAMICS, was released August 29, 2017. Check out the Challenge and Challenge Guide for everything you need to know! You can see the Field Setup Guide and overhead map photos here!

FIRST LEGO® League (FLL) is one of four competitive levels designed by FIRST, using LEGO® Mindstorms EV3 robotics kits as its platform. Aimed at an international audience of students ages 9 through 14, this competition teaches real-world problem solving through engineering design and teamwork. Beyond the events, FLL also works closely with schools and other youth-based organizations to transform the perception of science and technology—inspiring kids who might not otherwise have found a love for these fields to pursue further studies and career paths in science and technology.

Board of Directors Meeting