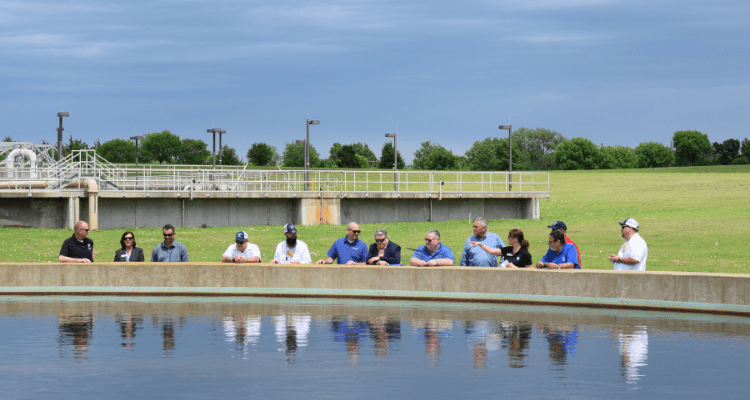 Since the North Texas Municipal Water District (NTMWD) began providing wastewater services in the early 1970s, the populations in the cities served has continued to rise at exponential rates. This remains true for two of our Sewer System Participants – the cities of Murphy and Wylie – who serve as good examples of the NTMWD meeting the common needs of communities through regionalization.

It wasn’t long after the approval of District Policy Number 10 in 1973, a guideline allowing the District to work with municipalities on a voluntary basis for advanced wastewater treatment facilities, that it would partner with Murphy and Wylie to take over operations and construct plants to meet their growing needs. Even though both cities had relatively small populations in the early 70s, less than 5,000 combined, the growth projections indicated they would not remain small for long.

Throughout the remainder of the 70s and 80s, the District operated those early wastewater treatment plants to serve their residents, as well as the collection system for the Murphy plant. By 1990, it was clear that the projected rapid growth surrounding these two cities warranted a more regional approach. Talks began that year, but it wasn’t until 1999 that NTMWD signed a three-party contract with Murphy and Wylie to begin preliminary design of the Muddy Creek Wastewater Treatment Plant (WWTP) and associated infrastructure.

After a lengthy permitting process of nearly three years, construction began in 2003 and the 5 MGD plant began operations in 2005. Flows are conveyed to Muddy Creek WWTP through the Maxwell Creek Interceptor, which services Murphy residents and connects to the Muddy Creek interceptor, which services Murphy and Wylie. As soon as the Muddy Creek WWTP became operational, design work began on its expansion to 10 MGD, which was completed and placed in service in 2007.

The construction and operation of Muddy Creek WWTP allowed for numerous benefits. The older, smaller plants in Murphy and Wylie were shut down. Murphy has turned the land into a popular neighborhood park, and Wylie is working with the District on options for its old plant site. Through this regional approach, watershed protection is enhanced as discharge regulations are stricter for the larger plants resulting in a higher quality of water released back into area waterways.

Another benefit of regionalization can be seen in the growth planning options. The Muddy Creek WWTP site has room to expand as Murphy and Wylie grow. This summer, design work begins on a master plan to evaluate its current condition and lay the groundwork for projects needed to meet the future wastewater treatment needs of Murphy and Wylie. One such project is Muddy Creek’s expansion to 15 MGD.  The project is scheduled to begin construction in late 2021. NTMWD continues to communicate with the cities to ensure future wastewater needs are met to protect public health, protect the environment and support economic growth.

Our history of wastewater service in Murphy and Wylie coupled with the District’s ongoing expansion and maintenance plans demonstrate our continued dedication to our vision statement, “Regional Service Through Unity – Meeting Our Region’s Needs Today and Tomorrow.”