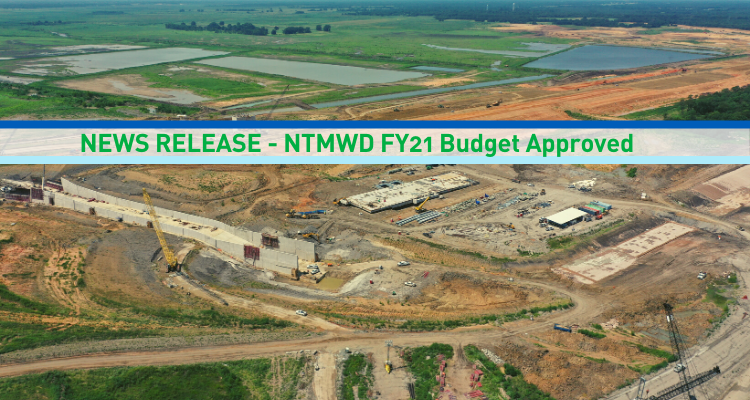 The North Texas Municipal Water District (NTMWD) Board of Directors has adopted a fiscal year (FY) 2021 budget that keeps the wholesale water rate at the current level, $2.99 per thousand gallons of treated water for its member cities. The NTMWD FY 21 budget and wholesale water rate goes into effect on Oct. 1.

The 13 member cities – Allen, Farmersville, Forney, Frisco, Garland, McKinney, Mesquite, Plano, Princeton, Richardson, Rockwall, Royse City and Wylie – are partners in the regional water system. Other communities contract for water from NTMWD or cities served by the district with a total of nearly 80 communities receiving water from NTMWD on a daily basis. All cities set their own rates to cover their costs for delivering water to homes and businesses from their local systems. To help cities faced with financial impacts from the COVID-19 pandemic, NTMWD officials pledged to do everything possible to keep the regional system water rates flat.

“I appreciate how hard our staff worked to adjust plans, projects and programs to decrease spending and minimize impacts on our cities,” said Rodney Rhoades, Interim NTMWD Executive Director. “This is the first time since the FY2006 budget there is no increase in water rates,” Rhoades added.

The FY21 water system budget limits cost increases, unless related to new or expanding facilities, and shifts capital project funding to use reserves and debt to offset increased costs in some areas. In operations, there is an increase in the cost of chemicals used in the water treatment process. To offset that increase, NTMWD achieved savings through delayed projects, increased revenue from cities with new contractual minimums, and use of the newly established Rate Stabilization Fund. These actions helped keep the water rate flat, while maintaining a high level of service.

The NTMWD Regional Wastewater System members’ collective total cost will increase less than 6 percent, and the Solid Waste members’ cost per ton will not increase. For all the regional systems, NTMWD is implementing cost-control measures that include scheduling bond sales for capital projects to closely align with expected construction progress and only adding two new employee positions District-wide.