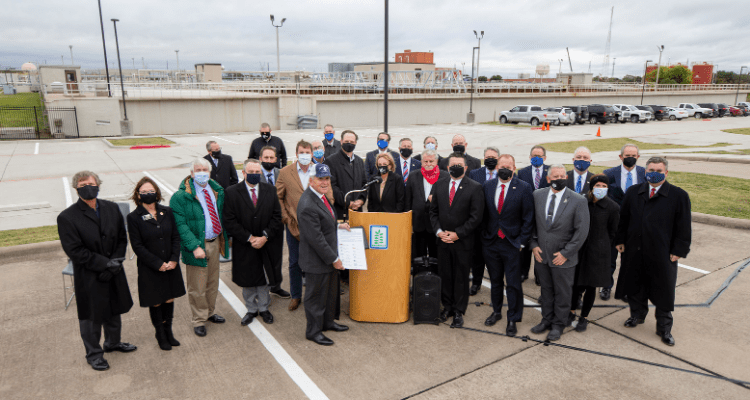 WYLIE, TX – Oct. 29, 2020:  The North Texas Municipal Water District (NTMWD) and the 13 Member Cities that partner in the regional water system have announced their agreement on an amended wholesale water services contract. On Thursday, Oct. 29, officials from the NTMWD member cities and water district gathered for a symbolic signing ceremony by the water treatment facilities at the district’s headquarters in Wylie as a show of unity and the beginning of a new era in their partnership.

The transition to the new cost-sharing structure will be phased in over the next 13 years.  A separate agreement approved by the 13 Member Cities and NTMWD will settle the wholesale water rate cases now pending before the Public Utility Commission of Texas (PUC).

A primary issue underlying the dispute was the methodology used to allocate system costs in the original water supply contract signed in 1953 and amended in 1988. Under that contract structure, each Member City agreed to pay its share of the regional water system costs based on its highest historic annual water demand. This methodology helped provide guaranteed and necessary funding of the fixed water infrastructure operations and financing costs for the regional water system. However, in light of conservation measures successfully implemented over the past decade, some Member Cities requested NTMWD change the contract structure to take into account trends in lower water use by those cities and higher use by growing cities.

After years of discussions, the 13 member cities and NTMWD were able to negotiate an amended contract and settlement agreement that has now been approved by the city councils of all 13 cities and the NTMWD Board of Directors. The new allocation method developed by the cities will gradually adjust the annual minimums (contractual funding commitments) over the next eight years to more closely align the basis for a member city’s portion of the overall system costs with the historical actual consumption of each city. Then, starting in 2029, the contractual allocation method will transition to a combination of the newly established annual minimums and actual water used.  Beginning in 2033, the annual minimum for each city will be based on a five-year rolling average of actual consumption. The effects of the new contract structure will affect each city’s retail customer rates differently because retail customer rates are set by the cities themselves.

“NTMWD appreciates the efforts by all involved to reach an agreement that the 13 Member Cities support. This is truly a historic time in the region and continued growth of both our Member and Customer communities will only increase demands on our system,” said Rodney Rhoades, NTMWD interim executive director. “We look forward to a fresh start in the partnership with our cities as we work together to provide the essential services needed to support our fast-growing region,” Rhoades added.

NTMWD also provides water service to customer communities across North Texas. NTMWD will soon begin discussions with customer communities and offer them the option to revise their contracts to reflect the new member city structure. A total of nearly 80 communities receive treated water directly or indirectly from the NTMWD regional system.