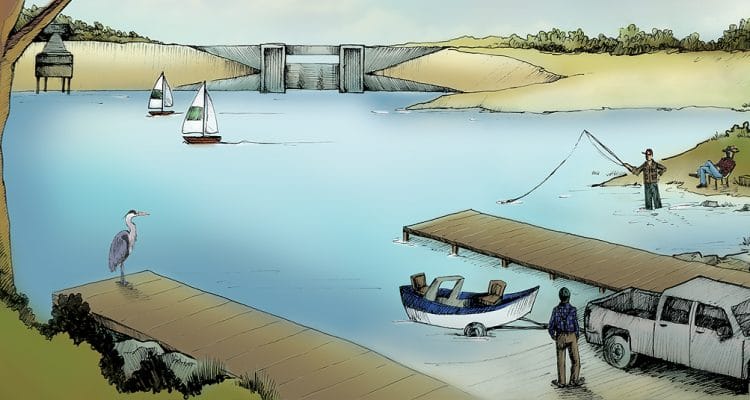 New name preserves history and heritage of the region

The North Texas Municipal Water District (NTMWD) Board of Directors has voted to rename the new reservoir being built in Fannin County to Bois d’Arc Lake.

The lake had been called Lower Bois d’Arc Creek Reservoir during its 15-year permitting process. During the groundbreaking ceremony this spring, the new reservoir was named Bois d’Arc Lake to honor all the cities the District serves. Following the ceremony, citizens and officials of Bonham and Fannin County urged the District to consider retaining a portion of the reservoir’s original name. The name Bois d’Arc Lake was requested to honor important local history and recognize the Bois d’Arc tree as a distinctive symbol with special significance for the region.

“NTMWD appreciates the thoughtful input from the local community that was expressed to our Board last month and adopting a name that is embraced by Fannin County is important to NTMWD,” said Tom Kula, NTMWD Executive Director.  “The District has worked hard over the years to be a good neighbor, and we look forward to continuing working together with the community on this project,” Kula added.

Construction activities to date include:

NTMWD expects to begin delivering water from the lake in 2022 – providing up to 108 million gallons of water a day for communities served by the District for decades to come.