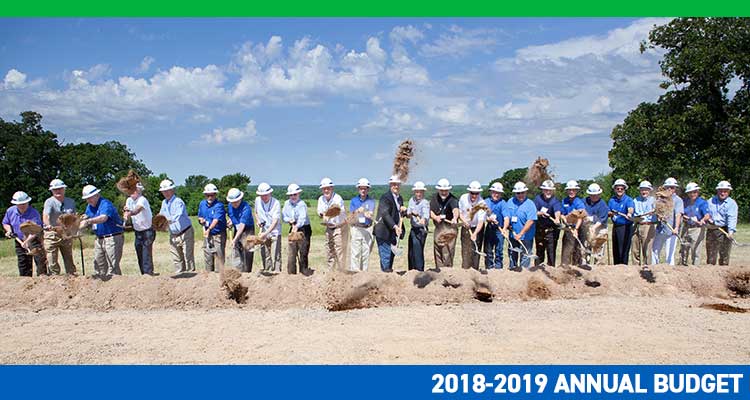 At a special-called meeting August 17, the North Texas Municipal Water District (NTMWD) Board of Directors approved a new method for budgeting its annual operating costs and capital projects. The budget adjustment will result in a smaller increase to the wholesale water rate than originally expected for the 2019 fiscal year (FY19), which begins October 1, 2018.

NTMWD has traditionally used the total of city water supply contract amounts to estimate the potential annual variable expenses such as chemicals, power and water purchases. Then, at year-end, cities using less water than their contractual amount receive a rebate for those “variable” operations costs. Beginning in FY19, variable costs will be budgeted based on 90 percent of the total contract amounts to more closely align with projected total demands across all the cities served by the District.

Each city’s contractual amount also determines its proportional share of the regional water system costs. Variable costs funding only makes up about 15% of the NTMWD wholesale water rate. The remaining 85 percent of the rate covers fixed costs.

To maintain reliability and plan for future needs, the District is investing in a number of important projects, including the new Bois d’Arc Lake under construction in Fannin County. With the permit and financing now in place for this $1.6 billion project, the District has greater certainty about the annual funding needed and is able to budget less than originally projected. This is possible due to low-interest financing recently approved by the Texas Water Development Board (TWDB) and adjusting the timing for issuing bonds.

To date, the TWDB has committed nearly $1.5 billion of low-interest financing for the new lake and related projects under the State Water Implementation Fund of Texas (SWIFT) program. This is anticipated to save over $230 million in interest. Additionally, bond sales for capital projects across all three systems (water, wastewater and solid waste) will be timed to more closely align with expected construction progress. The combination of these factors enables the District to request less funding in FY19 to cover the costs of the capital program.

By adjusting the way NTMWD develops its budget to reflect actual annual system-wide water demands (operations funding) and more certainty for the capital program (capital funding), the District’s total revenue requirement for FY19 will result in a 14-cent rate increase – half of what was originally needed.

These are just a few examples of how the District is seeking ways to manage costs for the cities we serve while responsibly investing in the projects and programs that are vital to support essential services for our fast-growing region.