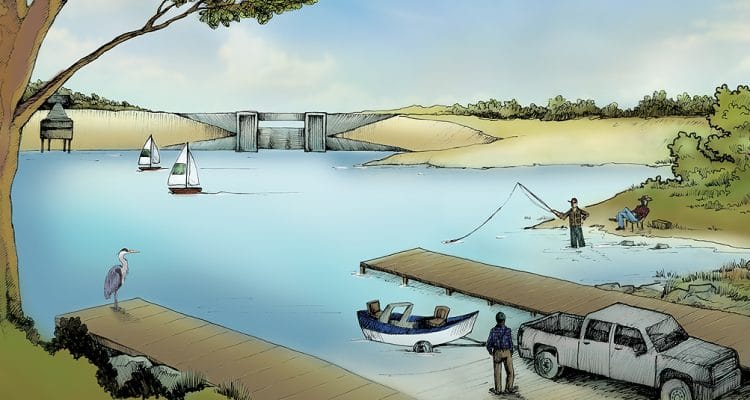 The NTMWD and its 13 Member Cities have been working together over a decade to plan and permit the lake. The reservoir’s final permit approval was received in February of this year.

“It’s taken a tremendous team effort with support from so many over the years,” said Tom Kula, NTMWD Executive Director. “The District truly appreciates the support of all who have been involved in making this long-awaited project a reality.”

Over three hundred people gathered on the reservoir’s future shore for the celebratory groundbreaking event. Representatives from the cities, counties, state, and water district gathered to hear remarks from U.S. Congressmen Sam Johnson and Pete Sessions, Fannin County Judge Creta “Spanky” Carter, incoming NTMWD Board President John Sweeden, and Executive Director Tom Kula. In addition to restating their gratitude for the partnership of so many, the District board also officially announced the reservoir’s new name (formerly called the Bois d’Arc Lake), one chosen in honor of its District cities and supporters who made the project possible.

“The District was created by visionary leaders of small communities in North Texas who came together in the 1950s for the common need of water,” explained John Sweeden of Richardson. “That continues to be the driving force behind this reservoir and is why the board has named it the Bois d’Arc Lake.”

NTMWD will build, own and operate the new 16,641-acre lake located northeast of Bonham and northwest of Honey Grove in Fannin County. A 90-foot dam will create a lake capable of storing 367,500 acre-feet of water (120 billion gallons) and serving 1.7 million North Texans – a population that is expected to double over the next 50 years. Supplies from the Bois d’Arc Lake will provide a vital supplement to the District’s diligent water conservation efforts as part of a comprehensive long-term plan to meet the fast-growing region’s needs.

“Clean, reliable water is something all Americans want and need. And because drought is no stranger to our area, one of my longstanding priorities in the United States Congress has been water,” Representative Sam Johnson said during the ceremony. “After many years of hard work, it’s great to know that there will soon be a new lake that will provide essential water resources to North Texas families. And, I’m also proud to say that I led the bipartisan effort in 2016 to expedite the permitting process for this critical project.  I want to congratulate everyone involved – this is how to get things done together!”

In addition to providing an important source of water, the new lake is also anticipated to provide a host of recreational opportunities, as well as habitat for wildlife and a local economic boost of $509 million during construction and $166 million each year once complete.

“We’re creating much more than a lake,” Kula added. “Our mission is to provide a reliable long-term water supply for our North Texas communities and that requires critical infrastructure to treat and deliver the water to our growing member and customer cities.”

Related project components include constructing a pump station, installing a 35-mile raw water pipeline, improving various roads in Fannin County and building a mile-long bridge across the future lake. The District will also plant over 1.6 million trees, introduce 2,900 acres of other herbaceous plants and improve 40 miles of local streams. Water from the lake will flow to a separately planned new water treatment plant in Leonard with the initial capacity to treat up to 70 million gallons per day which will be transported through a planned treated water pipeline that will extend the northern part of the regional water system.

With the final permit approval and recent confirmation of design and construction bids, the District has also updated cost estimates for the lake and planned water treatment plant and system projects to $1.6 billion. This updated budget takes into account engineering costs, advances in the projects’ design and permit-required additions that were not known at the time of the previous 2015 estimate. To date, the Texas Water Development Board has approved $1.2 billion in low interest financing for the projects through the State Water Implementation Fund for Texas (SWIFT) program which is anticipated to save NTMWD and its cities over $200 million in financing costs.

Construction preparation activities have begun with grading of access roads and clearing of brush at the dam site. Major construction activities will be underway this summer. It is expected to take three summers to complete construction of the dam. Depending on rainfall, it should take nearly two years to fill the lake to an operational level. NTMWD expects to begin delivering water from the lake in 2022, and subsequently yield up to 108 million gallons of water a day for residents and businesses served by NTMWD for decades to come.

For additional information on the Bois d’Arc Lake, visit https://www.ntmwd.com/projects/north-texas-municipal-lake/

The North Texas Municipal Water District is the regional wholesale provider of water, wastewater and solid waste services for about 1.7 million residents across 10 counties in North Texas – one of the fastest-growing regions in the U.S. For more information, visit www.NTMWD.com.