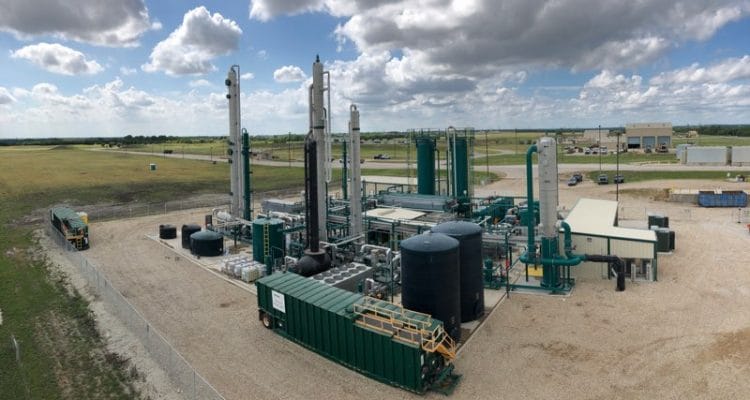 The plant is a result of a public-private partnership between NTMWD and Morrow Renewables.  Construction began in May of 2017 and the plant became operational in December.  Morrow Renewables built and operates the facility and sells the renewable natural gas. NTMWD receives a royalty on the gas produced and a share of the revenue generated which goes toward offsetting landfill operation costs.

“This is a win-win for NTMWD, its Member Cities and Morrow Renewables,” said Tom Kula, Executive Director of NTMWD.  “This plant not only generates revenue but also reduces emissions,” Kula added.

Last year, the landfill facility accepted approximately one million tons of solid waste. As waste decomposes, methane and carbon dioxide are generated. In the past, the gas was collected from a well field and burned off or “flared.”  By capturing and converting the landfill gas, Morrow Renewables is currently offsetting CO2 emissions by the equivalent to nearly 62 million gallons of consumed gasoline each year.

The plant is the ninth built and operated by Midland-based Morrow Renewables, six in Texas.  Morrow holds two patents that improve efficiency and reduce emissions from landfill gas treating operations.

“The NTMWD landfill project uses the latest in gas treating technology and efficiency.  The plant is designed to operate over 98% of the time,” said Luke Morrow, President of Morrow Renewables.  “The partnership with NTMWD is a model of how renewable energy projects can work in almost any community,” Morrow added.

NTMWD operates the 121 Regional Disposal Facility in Melissa which opened in 2004.  NTMWD’s five Solid Waste Member Cities: Allen, Frisco, McKinney, Plano, and Richardson, as well as other customers in the vicinity of Collin County deliver waste to the facility.