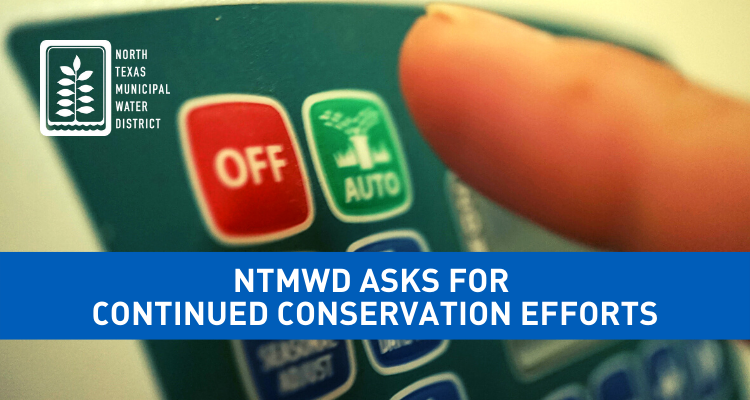 July 19, 2022: The North Texas Municipal Water District (NTMWD) is maintaining its call to action for continued reduction of outdoor watering by customers despite the progress being made to complete the critical maintenance at the Wylie Water Treatment Plant Complex. Drought conditions combined with peak water demands continue to put a stress on the regional delivery system and local water storage tank capacities. Ongoing water conservation habits by customers, will help NTMWD maintain water delivery for essential services of safe drinking water and public safety. As drought conditions persist, elevated and sustained local water conservation efforts will remain critical – as every drop counts.

As a reminder, this continued call to action is due to water production quantity, and not water quality – the water is safe to drink and use.

NTMWD crews have worked around the clock through the weekend and into the evening of July 18 to restore portions of water production capacity. They restored four of the six sedimentation basins. Further work will be ongoing and continuous. NTMWD is optimistic that all the basins will return to service soon. However, continued outdoor water conservation efforts are needed to allow NTMWD to maintain peak water demands and to allow cities to refill their own water storage tanks for their local communities. The NTMWD will provide additional updates as they are available.

Peak weather demands were illustrated on July 18, as it was announced that the North Texas region was experiencing its 3rd hottest summer of record. Historically, water demands double in summer, and 60% of that water is used for irrigation of outdoor landscape. With 21 days of triple-digit temperatures this summer, NTMWD is reinforcing the significant importance of the water conservation call to action as the weather forecast includes more 100-degree days.

Peak demands for water were experienced by NTMWD on July 12 as system-wide demands hit record levels in this ongoing drought. NTMWD pumped 628 million gallons over the 24-hour period exceeding the 603 million gallons pumped during a 24-hour period in 2011. Additionally, at the end of June 2022, seven of its 13 Member Cities and 17 additional Customer Cities were on pace to use more water than in previous years.

With an estimated 55,000 new customers moving into its 10-county service area annually, NTMWD is increasing its regional water production capabilities to serve its more than 2 million customers. The Wylie Water Treatment Plant Complex expanded its water production in 2021 adding another 70 million gallons per day. Water infrastructure is currently being expanded to include Texas’s newest reservoir, Bois d’Arc Lake. In conjunction with that new water source, Leonard Water Treatment Plant is on schedule to begin purifying 70 million gallons of water per day for the region in 2023, and a future total additional permitted capacity of 280 million gallons per day.