This map shows the general location of the Wilson Creek Regional Wastewater Treatment Plant. It is nearly six miles from the intake point for the Wylie Water Treatment plant.

Storm response
Lightning strikes on Wednesday, Dec. 26 damaged equipment at the Wilson Creek WWTP which disrupted the normal plant operations until repairs could be completed. Our crews worked around the clock to restore the plant to normal operations as quickly as possible (by Thursday, Dec. 27 at 6 a.m.) This resulted in some overflow that was mostly contained within the plant boundaries, however, water that had not been fully treated was discharged from the plant until full operations were restored. Crews isolated the affected area with a boom that was installed on Sunday. Our crews have continued to visit the site since the incident occurred, and the material previously observed (and captured on video by a local fisherman) is no longer visible at the surface. We believe additional rainfall over the last several days provided further dilution and any remaining particles have settled out.

Ongoing evaluation
The District hired a third-party expert who visited the site today to assess current conditions in the small cove area near the plant and help determine any next steps. The discharge area for treated water from the Wilson Creek plant, like other wastewater treatment facilities, typically has an environment beneficial to supporting aquatic life, wildlife, birds and vegetation. Over time, this vegetation breaks down and creates an organic layer on the lake bed. As the material naturally decomposes, it releases gas that may carry it to the surface. This activity may also be observed by boaters in the area and photos/video is being circulated on social media channels. Our expert observed isolated locations of this activity during the site visit today in the shallow cove area which is consistent with previous observations by our staff. Our expert believes that this activity may be unrelated to last week’s storm event. He did not observe any detrimental environmental impacts, and our staff collected samples to confirm these observations.

Outside expert hired by the District who visited the site Friday, Jan. 4. 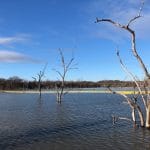 The small cove area has been isolated with a temporary boom and the District is encouraging boaters to avoid the area.

No impact on treated drinking water provided by NTMWD

(Wylie, Texas-December 31, 2018)  The North Texas Municipal Water District (NTMWD) crews have erected booms in a remote part of Lavon Lake to contain partially treated wastewater released from the Wilson Creek Regional Wastewater Plant during heavy thunderstorms last week. NTMWD staff will monitor the situation and remove any floating debris in the area which is located in the far northwest corner of Lavon Lake that is accessible only by boat.  In addition, a third party environmental consultant has been engaged to assess the condition of the impacted area and recommend remediation actions, if needed.

The release occurred on Wednesday, December 26, 2018 during a heavy thunderstorm.  Due to the storm, power outage and lightning related equipment damage, the treatment process was not completed and just under 28,000 gallons of wastewater spilled at the plant site and some eventually flowed into a small cove about 2,000 yards north of the Highland Park boat ramp at Lavon Lake.

NTMWD officials are working with appropriate government agencies including the Texas Commission on Environmental Quality (TCEQ), Texas Parks and Wildlife (TPW) and US Army Corps of Engineers (USACE).

Treated drinking water provided by NTMWD is safe and is not impacted.  Persons using private drinking water wells located within one-half mile of the spill site should distill or boil their water; however, NTMWD is not aware of any drinking water wells within this vicinity.  The public should avoid contact with the discharged waste material in the lake.  Boaters are advised to avoid the area.

Crews deployed to area of Lavon Lake to isolate and clean up released material,

No impact on drinking water provided by NTMWD

(Wylie, Texas-December 30, 2018)  The North Texas Municipal Water District (NTMWD) experienced a release of not fully treated domestic wastewater from the Wilson Creek Regional Wastewater Plant at 3020 Orr Road in Allen.  The discharge happened during heavy thunderstorms and a lightning related power outage on Wednesday, December 26, 2018.  Due to the power outage, the treatment process was not completed and just under 28,000 gallons of wastewater spilled at the site and some eventually flowed into the far northwest area of nearby Lavon Lake.  The area is accessible only by boat.

NTMWD crews have been deployed to the lake to erect booms to isolate and clean up the water.  District officials have notified the appropriate government agencies including the TCEQ.

Treated drinking water provided by NTMWD is safe and is not impacted.  However, persons using private drinking water supply wells located with one-half mile of the spill site should distill or boil their water.  The public should avoid contact with the discharged waste material in the lake.  Anyone who has come in contact with the material should bathe and wash clothes thoroughly as soon as possible.