Fluoride is a naturally occurring mineral in many water supplies. Water fluoridation is the controlled addition of fluoride to a public water supply for the purpose of decreasing the risk of tooth decay.

NTMWD approved the increased addition of fluoride in the water system in 1981 at the request of its Member Cities and after concurrence by the NTMWD Board of Directors. This was implemented in 1982 and has been ongoing ever since.

More than 70 years of scientific research has consistently shown that an optimal level of fluoride in community water is safe and effective in preventing tooth decay by at least 25% in both children and adults. Simply by drinking water, Americans can benefit from fluoride’s cavity protection whether they are at home, work or school. The Centers for Disease Control and Prevention named community water fluoridation one of 10 great public health achievements of the 20th century.

In 1974, Congress passed the Safe Drinking Water Act, which requires the U.S. Environmental Protection Agency (USEPA) to determine the level of contaminants in drinking water at which no adverse health effects are likely to occur. These non-enforceable health goals, based solely on possible health risks and exposure over a lifetime with an adequate margin of safety, are called maximum contaminant level goals (MCLG). Contaminants are any physical, chemical, biological, or radiological substance or matter in water. The USEPA has set the level of protection based on the best available science to prevent potential health issues. The MCLG level for fluoride is 4.0 mg/L or 4.0 parts per million (ppm). 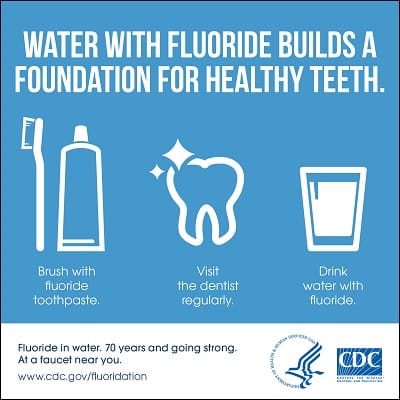